10 Advantages of Unity3D for Game Development

Unity is a cross-platform game engine that was developed by Unity Technologies. It was released in June 2005 at Apple’s Worldwide Developers Conference. Almost 34% of free mobile games that are available on the App Store and Google Play Store have been created using the Unity game engine.

Gaming platforms like Unity3D are used to develop 2D, 3D, VR, and AR games. Additionally, it helps developers to reach more than 500+ million gamers worldwide. Indeed, Unity3D is one of the most preferred gaming platforms for the development of games.

Further, Unity is preferred since it is a cross-platform that allows developers to create games for PC, consoles, mobile phones. Some of the games developed using Unity are Cupboard, Pillars of Unity, Hearthstone, Rust to name a few.

Advantages of Unity3D for Game Development:

Students that are enrolled in accredited institutions and are of legal age can use Unity3D free of cost. Similarly, individuals that have a revenue of funding of less than $100k in the previous year are eligible to use Unity for free. Unity’s pro version is for professionals and enterprises.

Your game development process can be simplified with pro-features of Unity3D like sound channel, splash screen customization, real-time cloud analytics, source code access, 3D composition booster, build server license capacity, and feature playback to name a few. Moreover, the Unity3D development platform grants permission to developers to create a full version of their game without any additional or hidden cost.

There are more than 3.3 million cross-platform developers that are using Unity3D for game development. Developing a game can be a tricky and tedious task thus technical support and assistance from the developer’s community can be helpful.

Although cross-development platforms are trending however the process of developing a native app is time-consuming. Unity has simplified this process by allowing a single script to be compiled and used on various platforms. Unity3D is compatible with various OS such as Android, Mac OS, iOS, Steam, and much more.

Further, it is also recommended for cross-platform development and multiplatform games. Games developed and deployed on Unity can be shared across multiple platforms like desktops, browsers, consoles, and mobile. Thus games can be developed without any hassle. If you’re in the market for developing a game then you should outsource professionals with years of experience. Our team of game development experts and DBAs will help you in building your web or mobile gaming app.

To learn more about our full range of game development services, book a FREE Consultation today.

Additionally, Unity provides 750 hours of learning content that can be used to upskill your team, educate your students. They also provide a customized learning plan for every member. Not only does it have additional learning resources, certifications, and live training workshops but its learning content is available in various languages including German, French, Japanese, Chinese, Spanish, Korean, and many others. Some of the certifications are Certified Associate, certified user, certified professional, and certified expert.

The Unity3D platform is easy to use and understand as compared to other technologies. As stated above, Unity provides an in-depth learning module that can be used by anyone to learn this platform. Moreover, you can use your creativity for idea generation and gameplay.

Unity is effective for not only rendering 2D scenes but also in 3D scenes. In addition, the offered quality is better compared to other game development tools. Unity has won various awards for its game development system.

Unity’s asset store is a one-stop location for all game developers. It facilitates developers’ effortless game creation. Moreover, this store provides an opportunity for craftsmen, modelers, and musical artists to earn money. Not only is their tech support efficient but the tech support members are exceptionally skilled and are reliable in case of any technical issues.

Even though Unity3D is known for 3D games, it is efficient for developing engaging 2D games for PCs, gaming consoles, mobile, and more. Unity 4.4 has a 2D motor which aids game developers in creating 2D games. Thus the game developer can integrate the physical science of the 2D world with eye-catching features.

The play mode feature in Unity3D is an excellent tool for swift iterative editing. Furthermore, this mode aids the developer in instantly playing, testing, and reviewing the game. If the game developer encounters a bug or if their game isn’t working properly then play mode can be paused and altered as per the developer’s liking. Also, Play and Play Plus Mode can help you achieve frame to frame referencing.

The scripting for Unity3D can be done using JavaScript or C#. These scripting languages are not only easy to learn but also easy to use. Unity’s Integrated Development Editor (IDE) offers notable features that are essential for game development. Further, it has a built-in analytics system that allows you to discover and use insights about your game. With Unity Analytics you can make minor changes for a fantastic gaming experience for your players.

Unity3D is one of the most popular and sought-after choices for game development. Various firms use this platform due to ease of use, Play mode, scripting language, learning tools among other things. It could be a great choice for your firm due to its various pros.

With a growing number of mobile users, many real estate firms are leveraging mobile application development to expand their business. As a real-estate firm, you should conduct extensive research on developing a real-estate mobile app.  Read more…

Web applications gained popularity and became a crucial element for everyday business. As far as web app development is concerned, you should use a robust technology stack to develop your web application. Django and Node.js Read more… 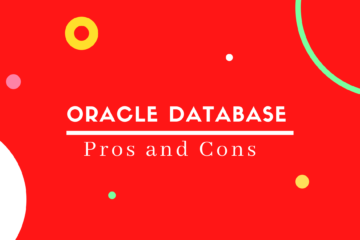 Pros and Cons of Oracle Database